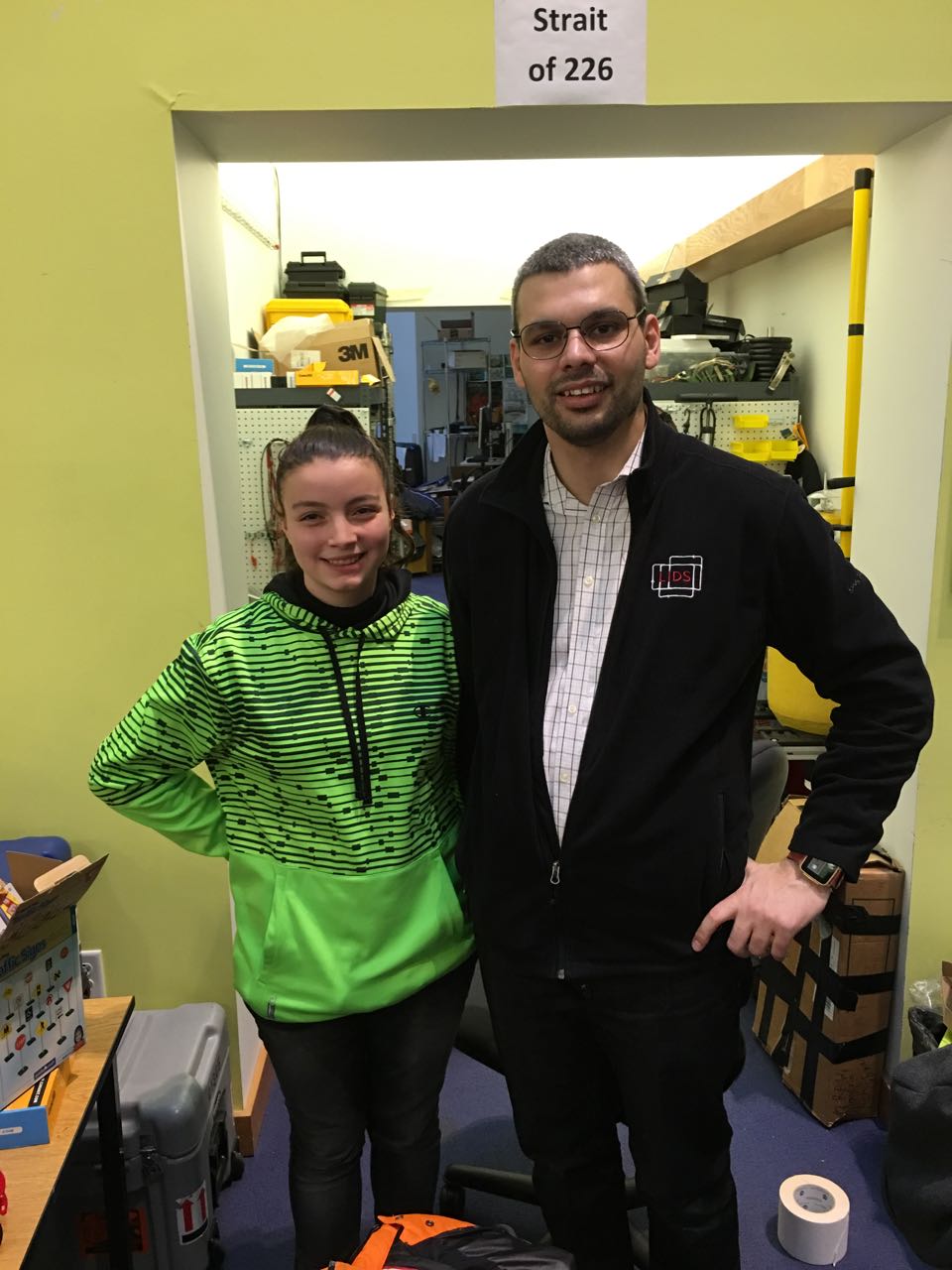 We host a guest post by Valeria Cagnina, who had the luck to meet our team very early – in fact, when the first Duckietown was still being built – and she helped with the tape!

Nothing is impossible…the word itself says “I’m possible”!

I discovered robotics when I was 11 years old with a digital plant made with Arduino that I saw in Milan Coderdojo. I really liked robotics and decided I would like to make my own robot.

So I searched online for a robot I could make myself. I found some videos on the web about a robot from MIT. I really loved this wonderful robot… but I was too young and I didn’t have the skills necessary to build it. So I surfed online to search other types that would be easier to build, but in my mind remained the dream to go to see this cool robot at MIT in Boston.

After a while, following and making my own Youtube videos, I made my first robot alone at 11 years old: it could move itself around a room avoiding obstacles thanks to its distance sensor programming with Arduino.

In Italy it was not so common to make a robot at 11, so I was able to share this experience a lot of events and conferences that brought me to speak in a TEDx at 14 years old.

Casually, at the same age, I travelled to United States to visit New York, Boston and Canada… at the beginning it seemed a normal holiday…

I convinced my parents to extend our trip to stay more time around MIT. We went sightseeing in Boston and in MIT but it wasn’t enough for me! I wanted to look inside this place that was so magical to me, and I especially wanted to talk with the engineers that build and program robots! Maybe I would see that same robot that I found when I was 11 years old!

I left my parents visiting the rest of Boston and I started to go alone around the MIT departments, trying to open every door that I found in front of me.

While I was walking, I was looking through the laboratories windows and my attention was caught by an empty room -I mean with no humans inside 😀 ! – full of duckies and with a sort of track for cars on the floor.

What was this room about? What was the purpose of these duckies? I was very, very curious about it and had many questions, but there was no one in the lab!

Obviously I never give up, I absolutely believe that nothing is impossible so, every day, until my departure to the next leg of our trip, I continued to go around MIT passing in front of THAT lab hoping to find someone in it.

Finally one day I saw some people inside the lab doing something. I was really excited! I watched them from the window. I absolutely wanted to know what they were doing –  one of them was soldering, another one was using duct tape. Suddenly they saw me and they invited into the lab! What an astonishment for me!

Immediately they asked me a lot of questions: why was a 14 year old roaming MIT alone, why was I so excited about that lab… Then one of them (I didn’t know his name) asked if I wanted to help build “Duckietown”. He told me about the project (at that time it wasn’t started yet) and he asked me about myself and the first robot I built. After an afternoon spent together, I discovered that this strange guy was Andrea Censi, one of the founders of the Duckietown project! Amazing!

Andrea proposed to me a challenge: I had to try to make my own Duckietown robot, a Duckiebot.  Since it was a university project, I was able to follow the online tutorials and ask lots of questions to all the other Duckietown members on the communication forum, Slack. He had only one request of me: he told me that even though the robot was hard to build and program, I shouldn’t give up.

I was so happy that I immediately agreed. I was handed the robot kit, a list of various links and some Duckies

Now it was my turn! I didn’t want to disappoint Andrea, so as soon as I arrived in Italy I put myself to work but, wow, building the Duckiebot was very hard! I spent an entire afternoon trying to comprehend just 4 rows of the tutorial. I began to ask questions on Slack and I tried, I tried and I tried again.

I never worked with Linux before so that was a completely new world for me. I started from the beginning, without knowledge at all but I worked for a few months until I received a message from Andrea: “Do you want to spend some time here, in Boston, working with us in Duckietown?” Of course I was willing, I couldn’t wait, it was an amazing proposal!

So I became a Duckietown Senior Tester at 15 years old and I spent almost all the summer inside the labs of MIT. My task was simplifying the university-level tutorial and making it accessible to the high-school students (like me

) as well as making the Duckiebot, which had now evolved!

Thanks to the help of Andrea and Liam (the other founder) I finally succeeded to program my robot: it was now able to drive autonomously in Duckietown. If felt like a dream come true!

Spending the summer in Duckietown at MIT allowed to me to discover a completely new world: I understood that education could be playful and that learning could be fun!