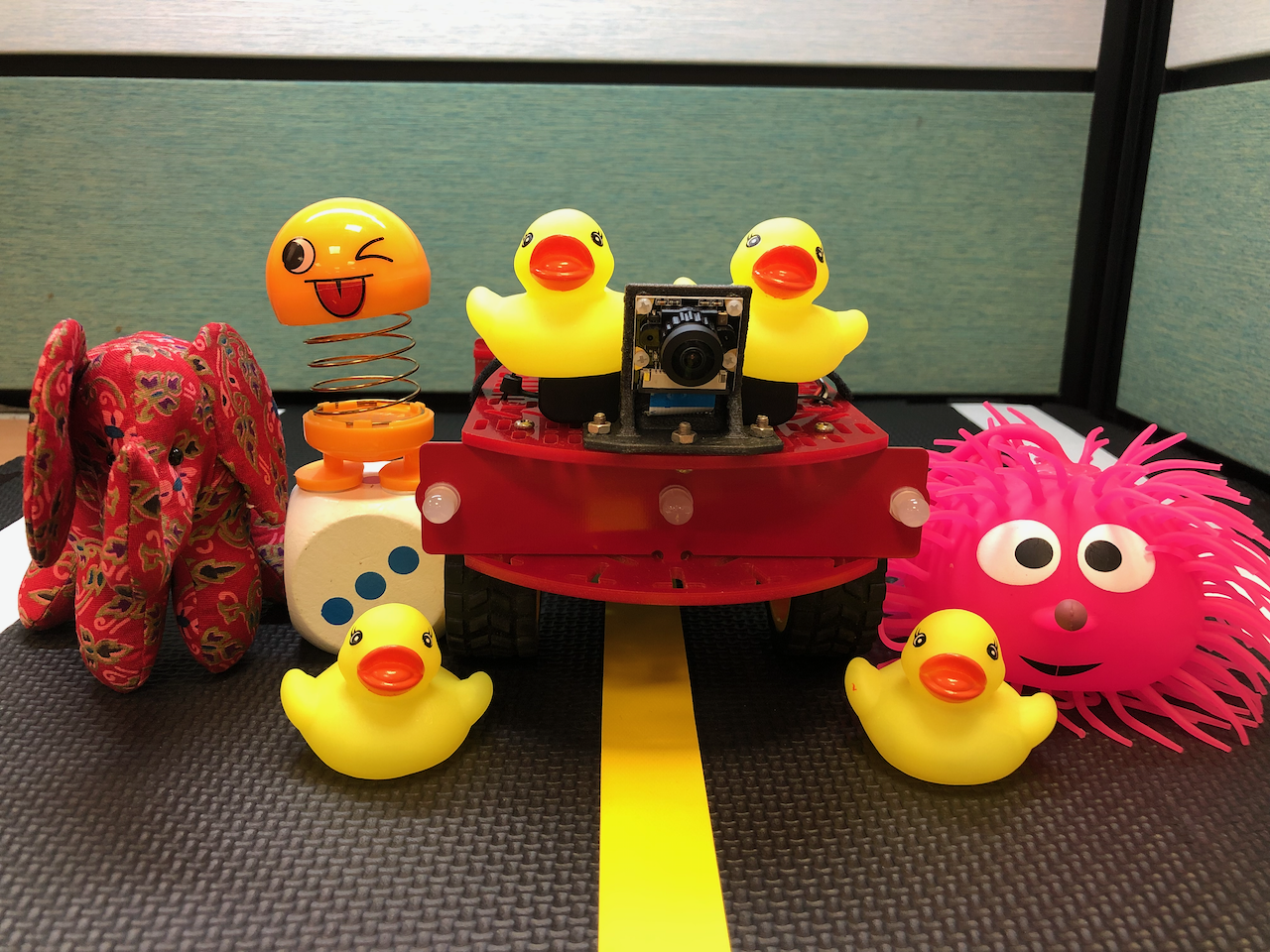 Machine learning is becoming more and more common in cyber-physical systems; many of these systems are safety critical, e.g. autonomous vehicles, UAVs, and surgical robots.  However, machine learning systems can only provide accurate outputs when their input data is similar to their training data.  For example, if an object detector in an autonomous vehicle is trained on images containing various classes of objects, but no ducks, what will it do when it encounters a duck during runtime?  One method for dealing with this challenge is to detect inputs that lie outside the training distribution of data: out-of-distribution (OOD) detection.  Many OOD detector architectures have been explored, however the cyber-physical domain adds additional challenges: hard runtime requirements and resource constrained systems.  In this paper, we implement a real-time OOD detector on the Duckietown framework and use it to demonstrate the challenges as well as the importance of OOD detection in cyber-physical systems.

Machine learning systems perform best when their test data is similar to their training data.  In some applications unreliable results from a machine learning algorithm may be a mere nuisance, but in other scenarios they can be safety critical.  OOD detection is one method to ensure that machine learning systems remain safe during test time.  The goal of the OOD detector is to determine if the input sample is from a different distribution than that of the training data.  If an OOD sample is detected, the detector can raise a flag indicating that the output of the machine learning system should not be considered safe, and that the system should enter a new control regime.  In an autonomous vehicle, this may mean handing control back to the driver, or bringing the vehicle to a stop as soon as practically possible.

In this paper we consider the existing β-VAE based OOD detection architecture.  This architecture takes advantage of the information bottleneck in a variational auto-encoder (VAE) to learn the distribution of training data.  In this detector the VAE undergoes unsupervised training with the goal of minimizing the error between a true prior probability in input space p(z), and an approximated posterior probability from the encoder output p(z|x).  During test time, the Kullback-Leibler divergence between these distributions p(z) and q(z|x) will be used to assign an OOD score to each input sample.  Because the training goal was to minimize the distance between these two distributions on in-distribution data, in-distribution data found at runtime should have a low OOD score while OOD data should have a higher OOD score. 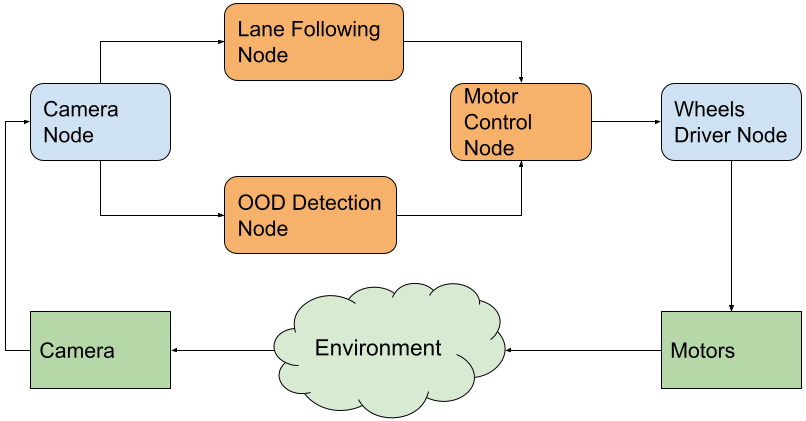 We used Duckietown to implement our OOD detector.  Duckietown provides a natural test bed because:

In our experiment, we used the stock DB18 robot.  Because we took advantage of the existing Duckietown framework, we only had to write three ROS nodes ourselves: 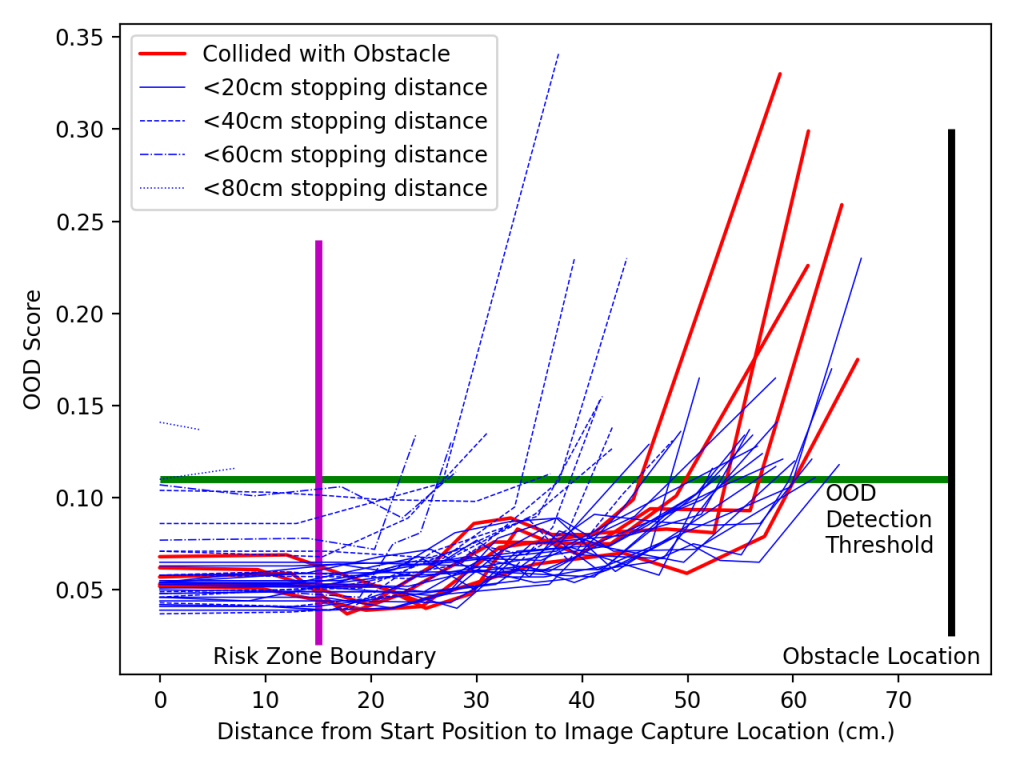 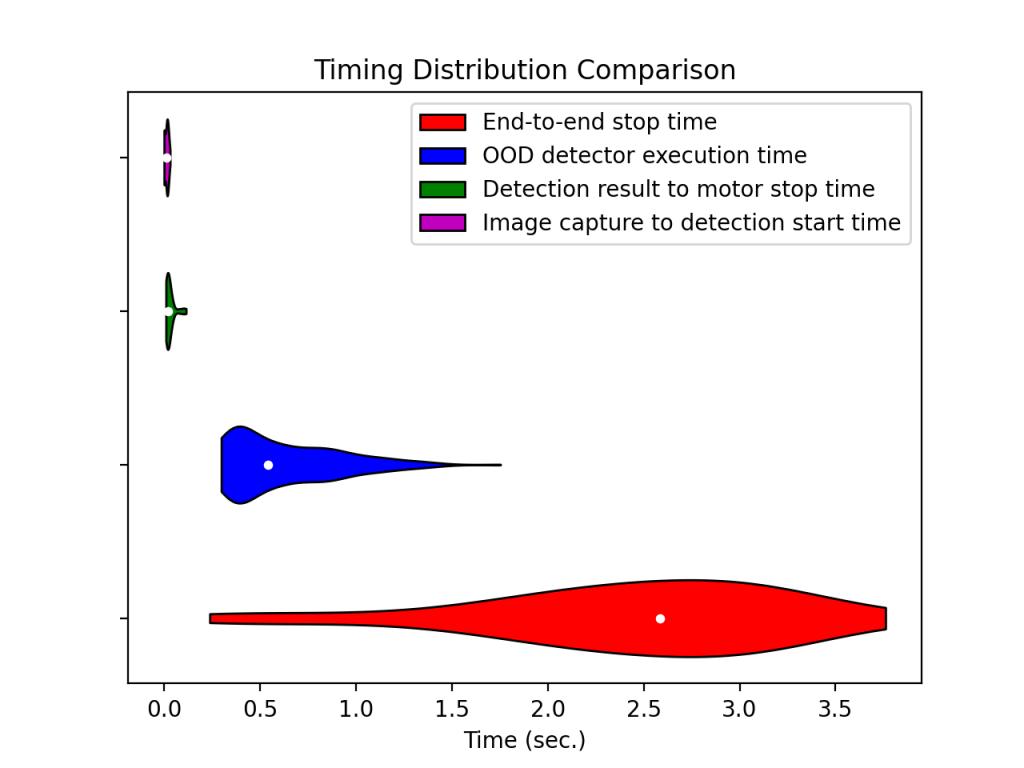 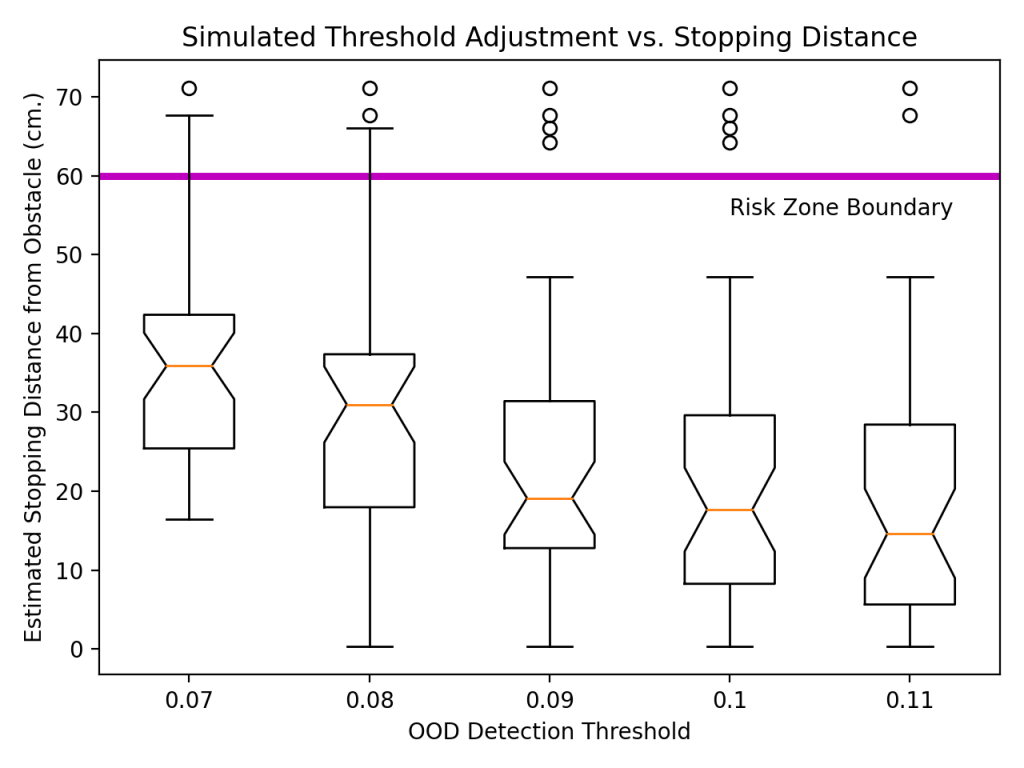 Our experiment considers the emergency stopping distance required for the Duckiebot when an OOD input is detected.  In our setup the Duckiebot drives forward along a straight track.  The area in front of the robot is divided into two zones: the risk zone and the safe zone.  The risk zone is an area where if an obstacle appears, it poses a risk to the Duckiebot.  The safe zone is further away and to the sides; this is a region where unknown obstacles may be present, but they do not pose an immediate threat to the robot.  An obstacle that has not appeared in the training set is placed in the safe zone in front of the robot.  As the robot drives forward along the track, the obstacle will eventually enter the risk zone.   Upon entry into the risk zone we measure how far the Duckiebot travels before the OOD detector triggers an emergency stop.

We defined the risk zone as the area 60cm directly in front of our Duckiebot.  We repeated the experiment 40 times and found that with our system architecture, the Duckiebot stopped on average 14.5cm before the obstacle.  However, in 5 iterations of the experiment, the Duckiebot collided with the stationary obstacle.

We wanted to analyze what lead to the collision in those five cases.  We started by looking at the times it took for our various nodes to run.  We plotted the distribution of end-to-end stopping times, image capture to detection start times, OOD detector execution times, and detection result to motor stop times.  We observed that there was a long tail on the OOD execution times, which lead us to suspect that the collisions occurred when the OOD detector took too long to produce a result.  This hypothesis was bolstered by the fact that even when a collision had occurred, the last logged OOD score was above the detection threshold, it had just been produced too late.  We also looked at the final two OOD detection times for each collision and found that in every case the final two times were above the median detector execution time.  This highlights the importance of real-time scheduling  when performing OOD detection in a cyber-physical system.

In this paper we successfully implemented an OOD detector on a mobile robot, but our experiment leaves many more questions: