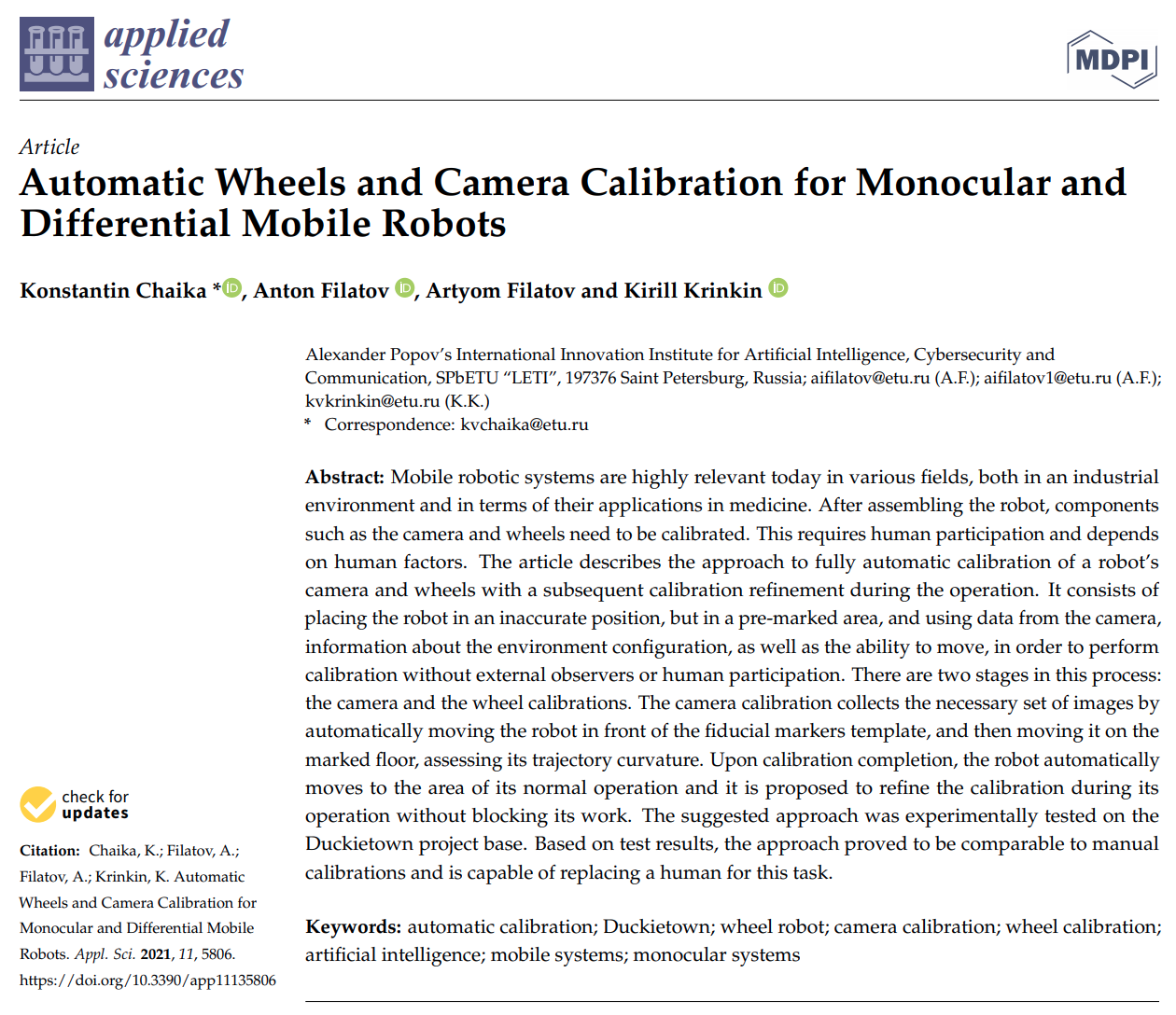 After assembling the robot, components such as the camera and wheels need to be calibrated. This requires human participation and depends on human factors. We describe the approach to fully automatic calibration of a robot’s camera and wheels.

The camera calibration collects the necessary set of images by automatically moving the robot in front of the chess boards, and then moving it on the marked floor, assessing its trajectory curvature. As a result of the calibration, coefficient k is calculated for the wheels, and camera matrix K (which includes the focal length, the optical center, and the skew coefficient) and distortion coefficients D are calculated for the camera.

Proposed approach has been tested on duckiebots in Alexander Popov’s International Innovation Institute for Artificial Intelligence, Cybersecurity and Communication, SPbETU “LETI”. This solution is comparable to manual calibrations and is capable of replacing a human for this task. 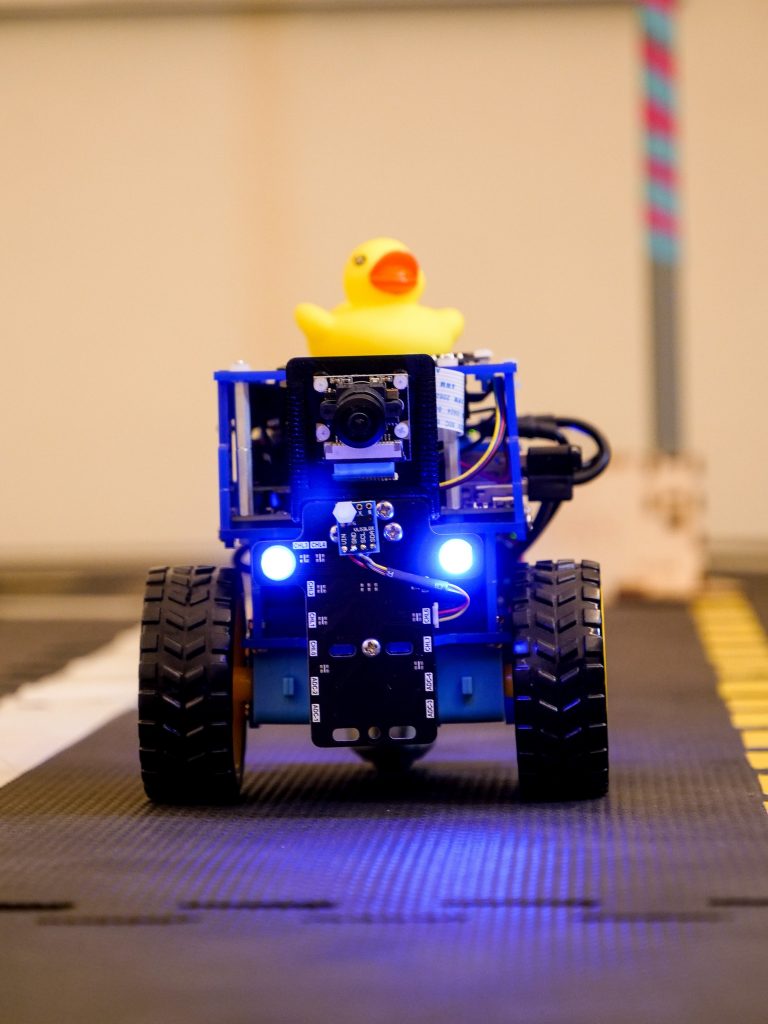 The initial position of the robot is a part of the floor with chessboards in front, where the robot is located from the very beginning, on which its camera is directed and the floorsurface is marked with aruco markers on the other side of it.

In fact, the camera calibration implies that the robot is rotating around its axis and taking pictures of all the viewable chessboards in turn. In this case, the ability to make several “passes” during the shooting process should be provided for, to control which of the boards the robot is currently observing and in which direction it should turn. As a result, the algorithm can be represented as a sequence of actions: “get a frame from the camera” and “turn” a little. The final algorithm comprises the following sequence of actions: 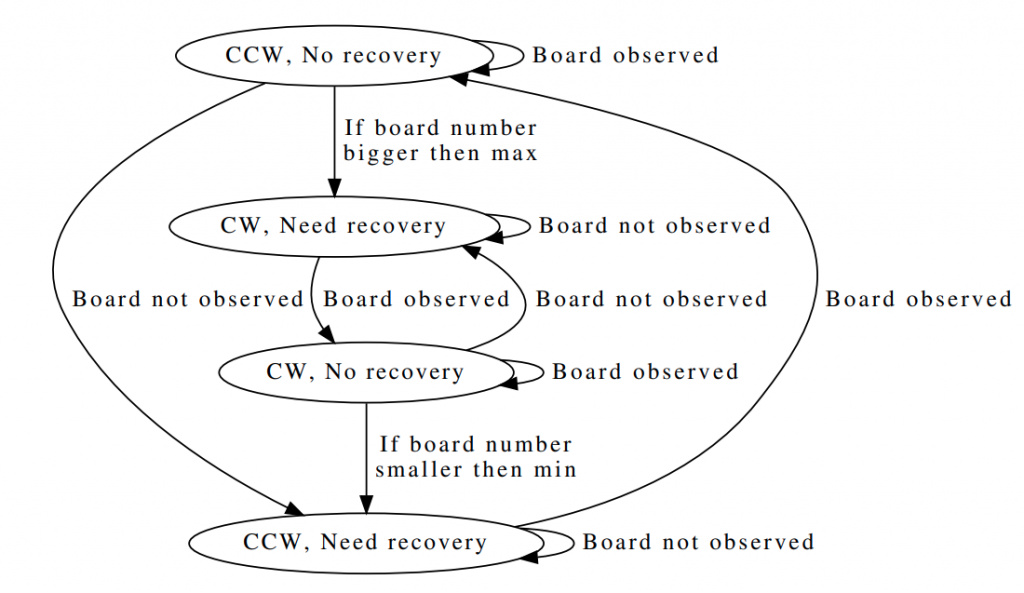 Floor markers should be oriented towards the chessboards and begin as close to the robot as possible. The distance between the markers depends on camera’s resolution, as well as its height and angle of inclination, but it must be such that at least three recognizable markers can simultaneously be in the frame. For ours experiments, the distance between the markers was set as 15 cm with a marker size of 6.5 cm. The algorithm does not take into account the relative position of the markers against each other; however, the orientation of all markers must be strictly the same.

Let us consider the first iteration of the automatic wheel calibration algorithm:

In order to reduce the influence of the error in calculating ki, coefficient k is refined only by the value of (ki−1)/2 after each iteration. It is important to complete this step after the robot moves back, because it reduces the chance of the robot moving outside the area width. If, after the next step, the modulus of the difference between (ki−1)/2 and 1.0 becomes less than the pre-selected E, then at this iteration (ki−1)/2 is not taken into account. If after three successive iterations ki is not taken into account, the wheel calibration is considered to be completed.

To compare camera calibration errors, the knowledge of how to calculate these errors is needed. Since the calibration mechanism is used by the OpenCV library, the error is also calculated by the method offered by this library.

As noted earlier, with respect to calibration factors, the approach used to calibrate the camera is not applicable. Therefore, the influence of the coefficient on the robot’s trajectory curvature is estimated. To do this, the robot was located at a certain fixed distance from a straight line, along which it was oriented and then moved in manual mode strictly directly to a distance of two meters from the start point along the axis, relative to which it was oriented. Then, the robot stopped and the distance between the initial distance to the line and the final one was calculated.

Two metrices were estimated – reprojection error and straight line deviation. First one shows the quality of camera calibration, and the second one represents the quality of wheels calibration. Two pictures below present result of 10 independent tests in comparison with manual calibration. 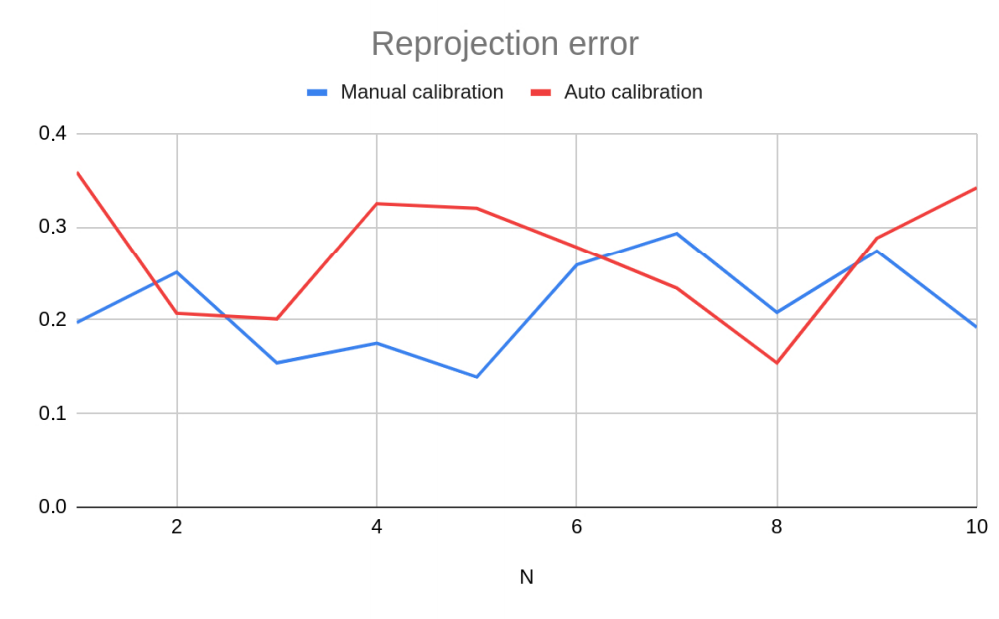 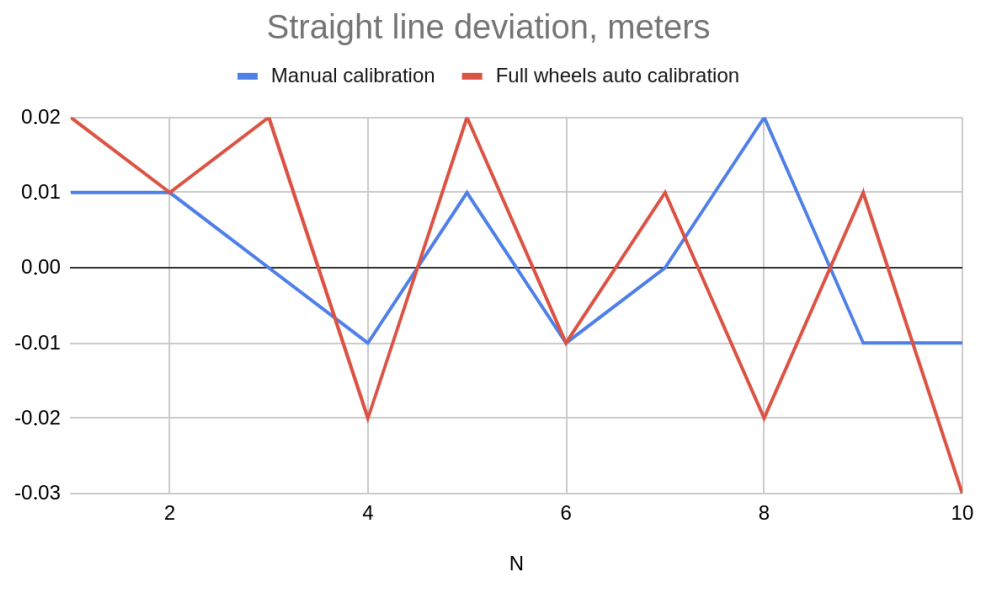 After the integration of this approach, it became necessary to automate the last step-moving the robot to the field. Due to the fact that after the calibration step completion the robot becomes fully prepared for launching autonomous driving algorithms on it, the automation of this step further reduces the time spent by the operator when calibrating the robot, since instead of moving the robot to the field manually, he can place the next robot at the starting position. In our case, the calibration field was located at the side of the road lane so that the floor markers used to calibrate the wheels are oriented perpendicular to the road lane.

Thus, the first stage of the robot automatic removal from the calibration zone is to return its orientation back to the same state, as it was at the moment when the wheel calibration started. This was carried out using exactly the same approach that was described earlier—depending on the orientation of the floor marker closest to the robot, the robot rotates step by step about its axis clockwise or counterclockwise until the value of the robot’s orientation angle is modulo less than some preselected value.

At this point, the robot is still on the wheel calibration field, but in this case, it is oriented towards the lane. Thus, the last step is to move the robot outside the border of the field with markers. To do this, it is enough to give the robot a command to move directly until it stops observing the markers, when the last marker is hidden from the camera view. This means that the robot has left the calibration zone, and the robot can be put into the lane following mode. 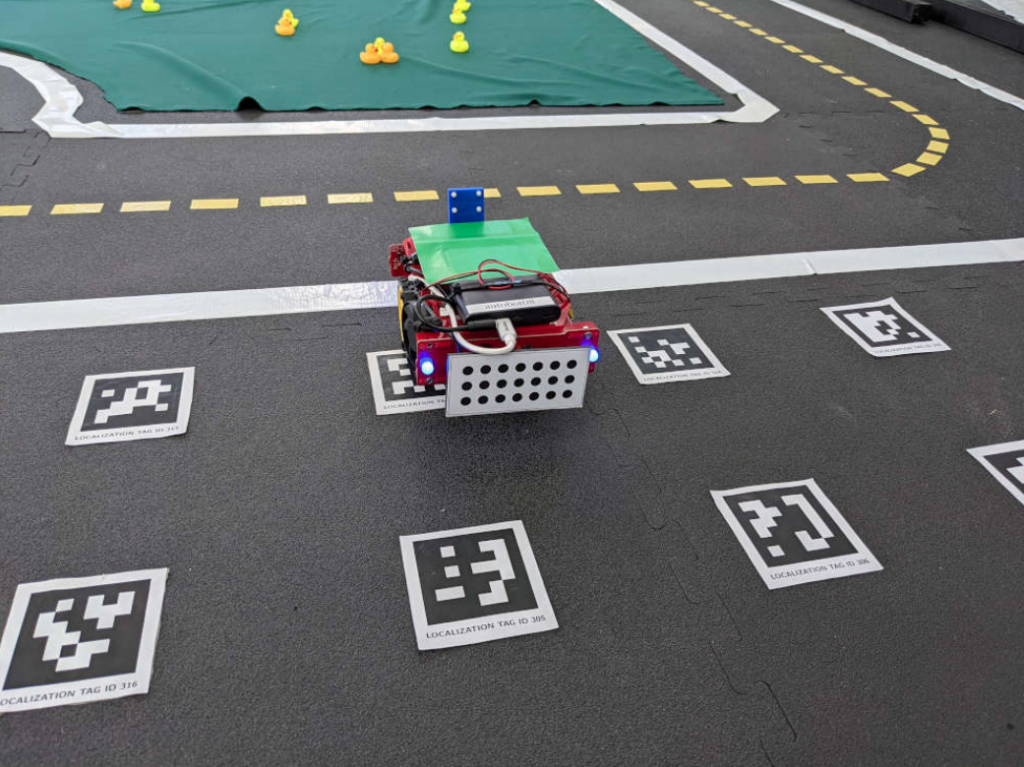 During the robot’s operation, the wheels calibration may become irrelevant. It can be influenced by various factors: a change in the wheel diameter due to wear of the wheel coating, a slight change in the characteristics of motors due to the wear of the gearbox plastic, and a change in the robot’s weight distribution, e.g., laying the cables on the other side of the case after charging the robot, and so a slight calibration mismatch can occur. However, all these factors have a rather small impact, and the robot will still have a satisfactory calibration. There is no need to re-perform the calibration process, just a little refinement of the current one seems to be enough. To do this, a section of the road along which the robots will be guaranteed to pass regularly, was selected.

The first marker in the direction of travel must have a predefined ID. It can be anything, the only limitation is that it must be unique for a current robot environment. Further, the following changes were made to the algorithm for the standard control of the robot: when the robot recognizes the first marker with a predetermined ID while driving right in the lane, it corrects its orientation relative to this marker and continues to move strictly straight ahead. Further, the algorithm is similar to the one described earlier—the robot recognizing the next marker can refine its wheel calibration coefficient, apply it, and change the orientation coaxially with the next marker. 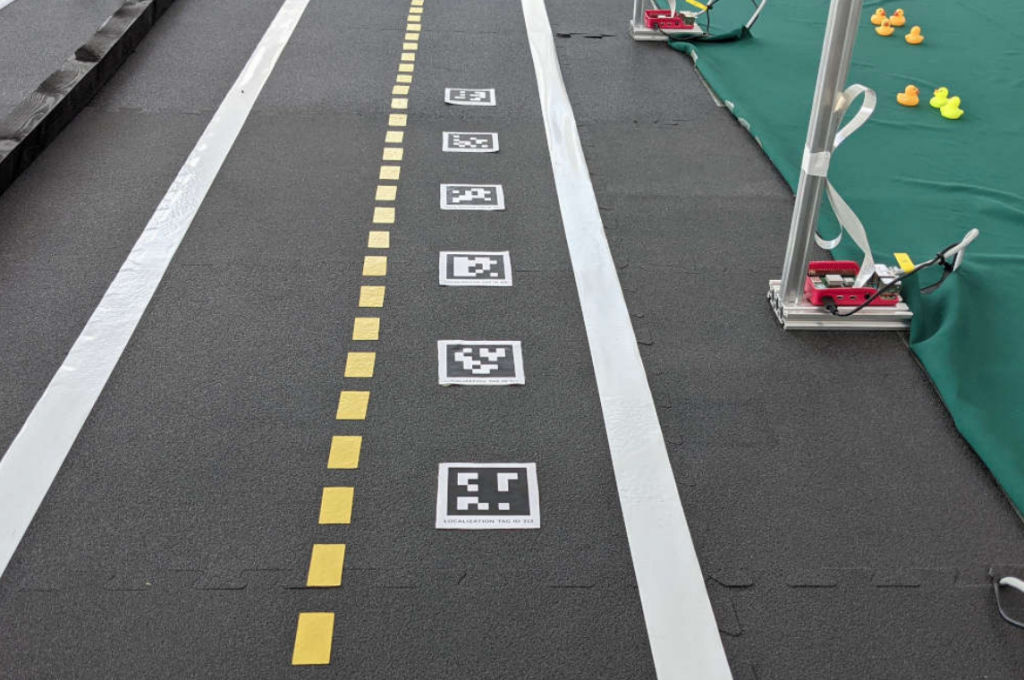 As a result, a solution was developed that allows a fully automatic calibration of the camera and the Duckiebot’s wheels. The main feature is the autonomy of the process, which allows one person to run the calibration of an arbitrary number of robots in parallel and not be blocked during their calibration. In addition, the robot is able to improve its calibration as it operates in default mode.

Comparing the developed solution with the initial one resulted in finding a slight deterioration in accuracy, which is primarily associated with the accuracy of the camera calibration; however, the result obtained is sufficient for the robot’s initial calibration and is comparable to manual calibration.