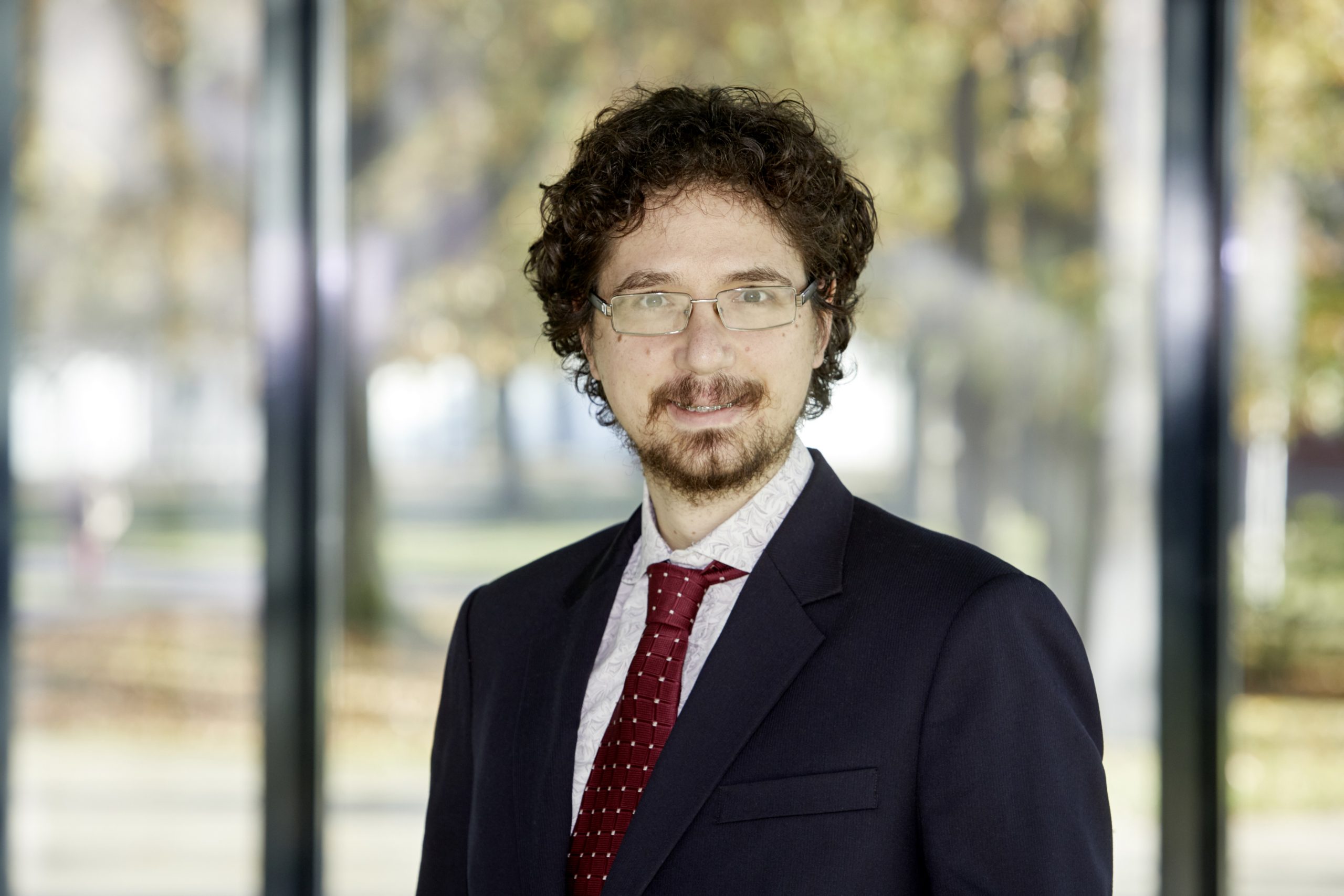 Jacobs University, Bremen, June 1, 2022: Francesco Maurelli, professor at the Jacobs University of Bremen, talks about how Duckietown impacted his work and his academic career.

The Duckietown path to robotics: an interview with Prof. Francesco Maurelli

Francesco Maurelli, professor at the Jacobs University of Bremen, Germany, shares in the interview below his interaction with Duckietown.

Let’s start by simply asking your name, who you are, where you work, what you do for a living.

Hi, Federico. Hi, everyone. I am Francesco Maurelli and I’m a professor in robotics at Jacobs University in Bremen.

When was the first time you came across Duckietown in your life? Describe your first contact with Duckietown for us.

Well, that was in my team. I was there as a Marie Curie scholar from Europe. I met Andrea and Liam, and learned about this new initiative. I was interested so I spoke in depth with them and with the students who took the course. I then looked at the videos and thought it was a great setup because it brings robotics closer to the students in a fun way by reducing the access barrier. Many people think that robotics is very hard, which is true. I’m not saying it’s easy, but on the other hand, there are easier paths to access robotics. Additionally the element of gamification makes people happy when they work with Duckietown. I found that students want to get involved regardless of the course work, they just like the concept. 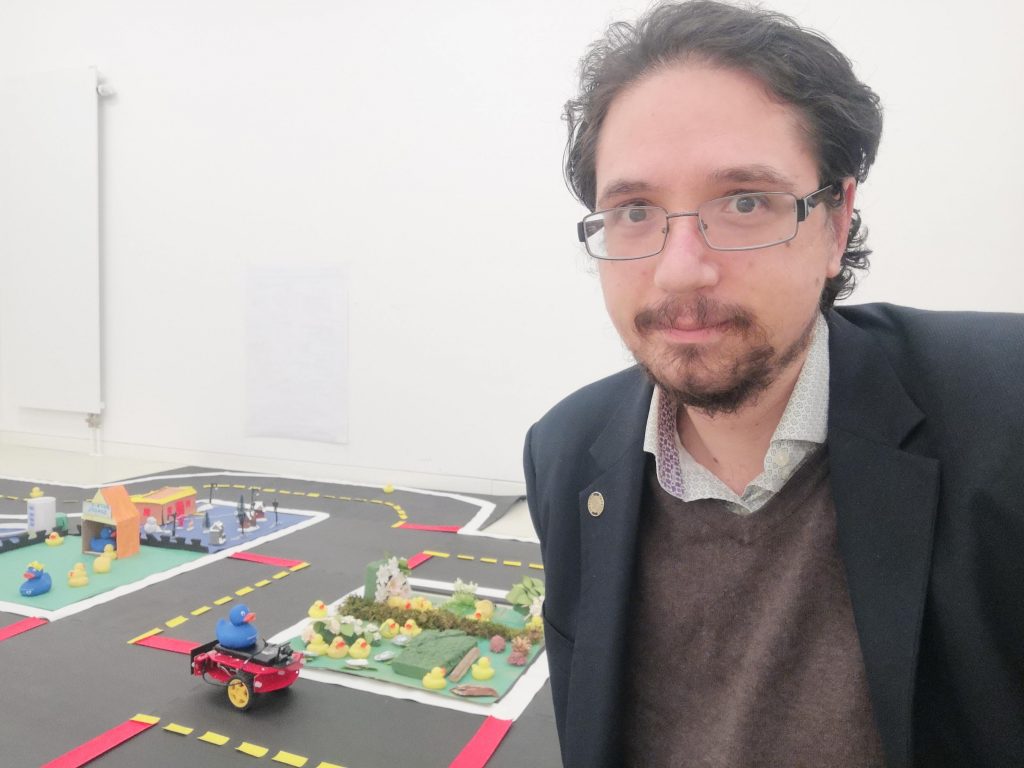 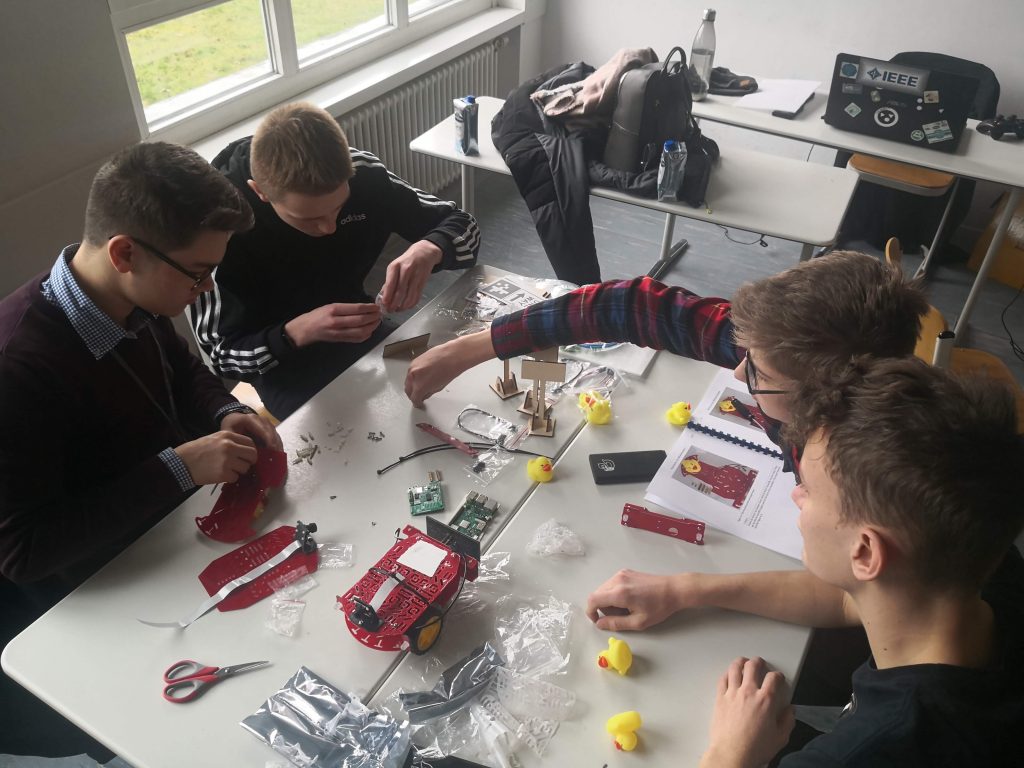 Thank you. Is there a specific thing that maybe you did using Duckietown in your life, a project, a program or some sort of ecosystem?

We have had three different initiatives based on Duckietown.

The first one, called Jacobs Robotics, was an extracurricular activity for students. I would meet interested students outside of class time, it wasn’t linked to academic credit. It was just for fun and for learning. Among the different robotics platforms, we had a group working on Duckietown. This was the initial step in using Duckietown at our university.

Then the second step was to embed Duckietown in the official curriculum. We have a bachelor’s program in robotics and intelligence systems, and I’m its program manager. We were rewriting and updating some parts of it as we underwent a new wave of accreditation. So I took the opportunity to redesign some aspects of the program and in this process decided to embed Duckietown at Bachelor level. I’ve introduced it at Ross Lab in simulation in the fall of the second year, in the third semester, and then we have a robotics project based on Duckietown in the spring, ofthe second year, (i.e. in the fourth semester). That means that when students start their third year, they already have an understanding of ROS, they have knowledge of Duckietown and they work with real systems. This means that they can do a much better thesis, even if it’s a Bachelor level, we can improve the average level. When I joined the University, the first month of the thesis was lost on students learning to use Ross, for example. Now we are a step ahead. 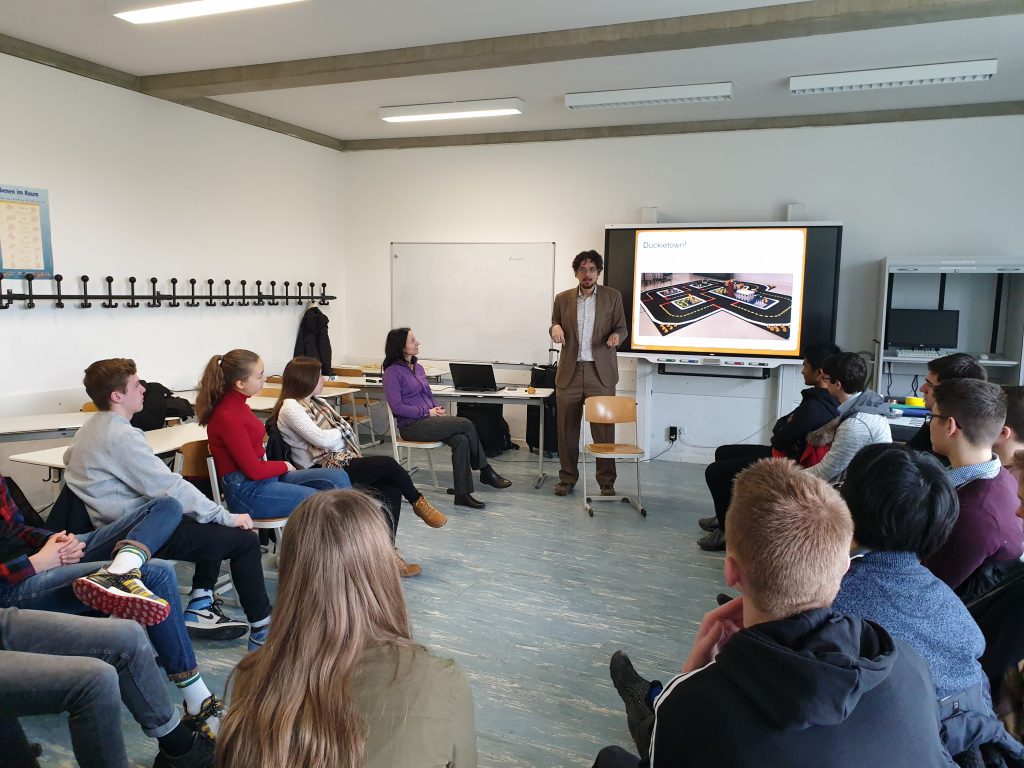 The third part is the research application. It’s not only a matter of having fun with students, or delivering courses to students, but also doing my own research. I have a project which is funded by the German Research Foundation, DFG, it is in collaboration with the psychology Department. The psychologists want to look at the characteristics that humans assign to entities to identify the “self”. We as roboticists are going to develop and program different robotic behaviors, which the behavioral scientist from the psychology department will analyze. In a nutshell, we will prepare different videos illustrating the same actions performed in different ways. A very basic example would be moving in a city at constant speed or moving in a city at variable speeds. Our partners in the psychology department will show these videos to the study participants and collect user feedback through questionnaires to determine which behaviors they think are more alike a self determined behavior.

This is extremely interesting. Thank you very much. Have you ever heard about the MOOC course?

Yes, actually. In fact I suggested to our students to look at the MOOC. Of course, it is set up in a different way with respect to our course, but it can be and it has been a useful tool for students to review some of the material through a different viewpoint. So it’s definitely a valuable learning material which is available to the community.

“It’s not only a matter of having fun with students, or delivering courses to students, but also doing my own research.”

Okay. My last question is would you suggest Duckietown to other people, colleagues or your students? And why?

Absolutely. I see that from my own experience, students like it and they learn a lot about robotics. All the different concepts ranging from control to localization to computer vision can be applied in Duckietown. So in our projects, in our robotics projects, different groups of students develop different ideas. And I see that they are enjoying themselves and they are learning. So it’s definitely a plus.

Thank you very much.