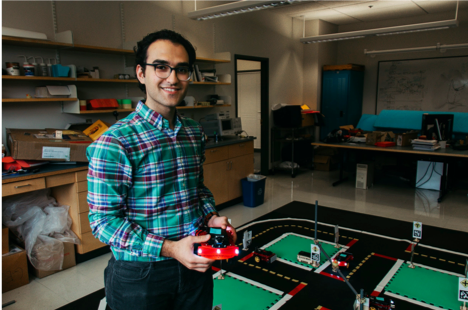 No one likes sitting in traffic – it is a waste of time and damaging to the environment. Thankfully researcher Arian Houshmand from Boston University CODES lab is on the case -and he’s using Duckietown to help solve the problem.

Traffic congestion around the world is worsening, according to transport data firm INRIX. In the U.S. alone, Americans wasted an average of 97 hours in traffic in 2018 – that’s two precious weekends worth of time. Captivity in traffic also costs them nearly $87 billion in 2018, an average of $1,348 per driver. Clearly, the need for smart transportation is reaching a fervor, not only to alleviate the mental and financial state of drivers, but to address the significant economic toll on affected cities.

Fortunately, development of intelligent mobility technologies is advancing.  In an ongoing research project funded by the U.S. Department of Energy’s (DOE) Advanced Research Projects Agency-Energy (ARPA-E) NEXTCAR program, BU researchers in collaboration with researchers from University of Delaware, University of Michigan, Oak Ridge National Lab, and Bosch are developing technologies for Connected and Automated Vehicles (CAVs) to increase their fuel efficiency and as a bi-product reduce traffic congestion.

The goal of this project is to design control and optimization technologies that enable a plug-in hybrid electric vehicle (PHEV) to communicate with other cars and city infrastructure and act on that information. By providing cars with situational self-awareness, they will be able to efficiently calculate the best possible route, accelerate and decelerate as needed, and manage their powertrain. This is an important task toward advancing the vision to create an ‘Internet of Cars,’ in which connected and self-driving cars operate seamlessly with each other and traffic infrastructure, improving fuel efficiency and safety, and reducing traffic congestion and pollution.

Today’s commercially-available self-driving cars rely on costly sensors, specifically radar, camera, and LIDAR (light) to operate semi-autonomously. In the NEXTCAR project, BU researchers with project collaborators are looking to go beyond that by developing decision-making algorithms to improve the autonomous operation of a single hybrid vehicle as well as algorithms for communications between vehicles and their environment, enabling self-driving cars to cooperate and interact within their socio-cyber-physical environment.

Several different functions have been developed throughout this project including:

●      Eco-routing: Procedure of finding the optimal route for a vehicle to travel between two points, which utilizes the least amount of energy costs.

●      Eco-AND (Economical Arrival and Departure): An optimal control framework for approaching a traffic light without stopping at the intersection by having traffic light cycle time information.

(ACC) that by benefiting from vehicle to vehicle (V2V) communication increases the safety and energy efficiency by reducing headway.

In order to validate and test the developed technologies, researchers first use simulation environments to test the algorithms. After verifying through simulation, they implement the algorithms on Duckietown, and finally deploy them on real cars (Audi A3 e-tron) at the University of Michigan’s M-city (test track for self-driving cars). 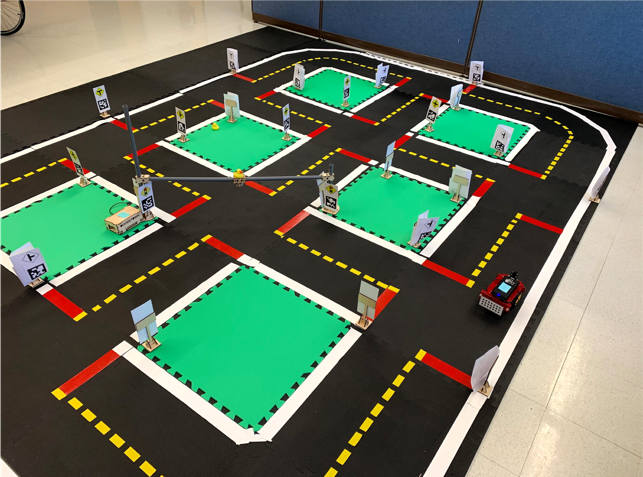 We use Duckietown to train students on how to implement their algorithms on embedded systems and also as a means to demonstrate our developed technologies in action and in a live setting. Since most of our research focuses on Connected and Automated Vehicles (CAVs), we need to establish connections between individual Duckiebots and traffic lights. As a result, we created a platform for exchanging information and control commands between all the cars and traffic lights.

Online localization of Duckiebots is a challenging task, and is missing from the current framework. We relied on our external motion capture sensors (OptiTrack) to localize the robots.

Duckietown is a nice platform for performing experiments on autonomous robots since It is relatively simple to set up the town and Duckiebots. Moreover, the built in perception and lane keeping capabilities are very useful to kick off experiments quickly. Traffic lights and signs are also helpful to create different scenarios for testing algorithms in city-like scenarios.

What would make Duckietown even more useful in our application is feedback sensors for determining wheel rotational speed/position as it is difficult to correct for rotational speed errors of the wheels and a ROS node for exchanging information between robots and traffic lights for testing collaborative control algorithms.